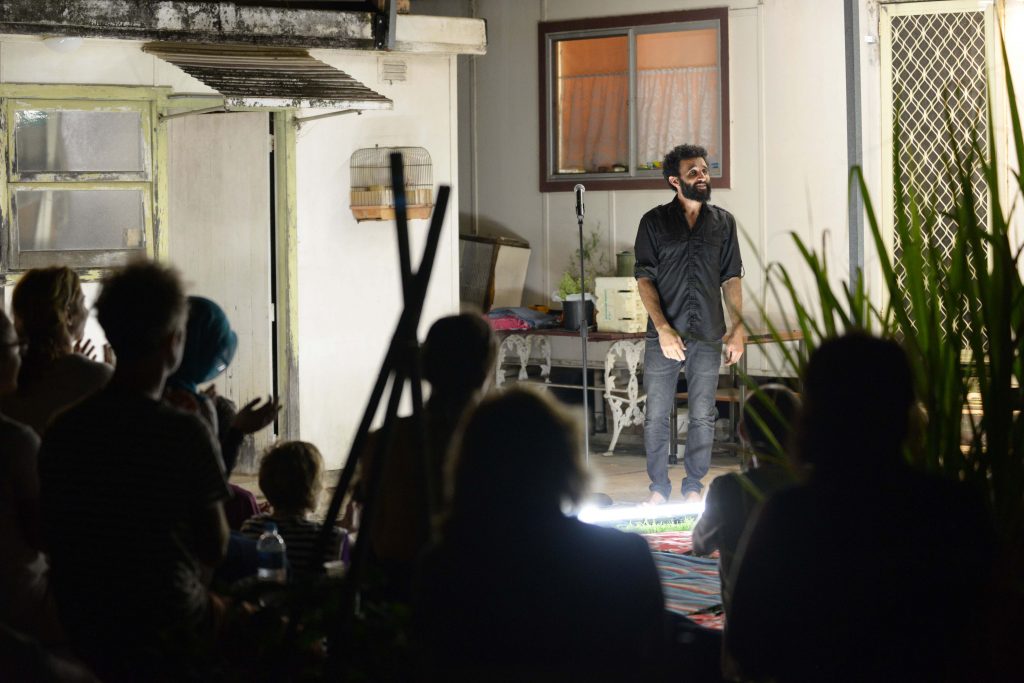 Performed by the inimitable Hazem Shammas, The Tribe is a story of belonging and family, told by Bani as a small boy finding his way in a young country by recounting tales of the old. At the heart of The Tribe is Bani’s love for his Tayta, his grandmother and core presence in his life, who carries all the truths of ‘The Tribe’ – a small Muslim sect who fled to Australia from Lebanon.

Performing alongside cellist and composer Oonagh Sherrard, Shammas’s Bani is like a visionary child channelling a Bedouin storyteller, captivating his audience under the stars in a suburban backyard. Based on Western Sydney writer Michael Mohammed Ahmad’s award-winning novel, The Tribe is an open invitation to listen to an Arab-Australian story from our backyard, in our backyards.

The Tribe had its acclaimed debut season at BANKSTOWN: LIVE,  where it was one of nine works, part of Sydney Festival 2015. UTP partnered with Belvoir to bring The Tribe from the streets of Sydney’s west into 3 backyards in Surry Hills – a different backyard each week of their season.

“You couldn’t get a more perfect setting for the story – a pregnant moon, a sky that felt like it was on the verge of busting open with summer rain… Shammas is a wonderfully expressive storyteller, with an easy, natural charisma that transfixes your attention. You’ll laugh, you’ll cry, you’ll wish the story didn’t end.”

“The Tribe tells Bani’s stories – stories that are familiar to many, me included… They’re all part of my lived experience growing up Greek-Australian… to see them placed on a stage in a suburb far from their origin for an audience perhaps not so acquainted with them — was a powerful thing… We need more theatre like this!”

All Together Now - Erasing Racism

UTP's The Tribe picked up an FBi SMAC Award for Best on Stage show.

Ahmad is currently the director of SWEATSHOP: Western Sydney Literacy Movement and a doctoral candidate at the Western Sydney University Writing and Society Research Centre. His essays and stories have appeared in The Guardian, HEAT, Seizure, SBS Online, The Lifted Brow and Coming of Age: Growing Up Muslim in Australia (Allen & Unwin). The Tribe is Mohammed’s debut novel and earned him the 2015 Sydney Morning Herald Best Young Novelist of the Year Award.

Shammas has worked on many productions with major theatre companies in Australia since graduating from WAAPA. In 2014 he appeared in the title role of State Theatre Company of South Australia’s production of Othello. Hazem held a regular role in Underbelly lll as the notorious Kings Cross nightclub owner ‘Bill Bayeh’, as well as appearing in SBS series East West 101 Season 2, ABC TV’s comedy At Home With Julia and Network Seven’s All Saints. Hazem’s feature films include X, directed by Jon Hewitt, Marc Gracie’s The Tumbler and Alex and Eve directed by Peter Andrikidis. Hazem is also a founder and director of Poetry In Action, a national touring theatre-in-education organisation that teaches poetry, literacy and the arts to high school students across the country.

Arts NSW, Arts on Tour, Australia Council for the Arts