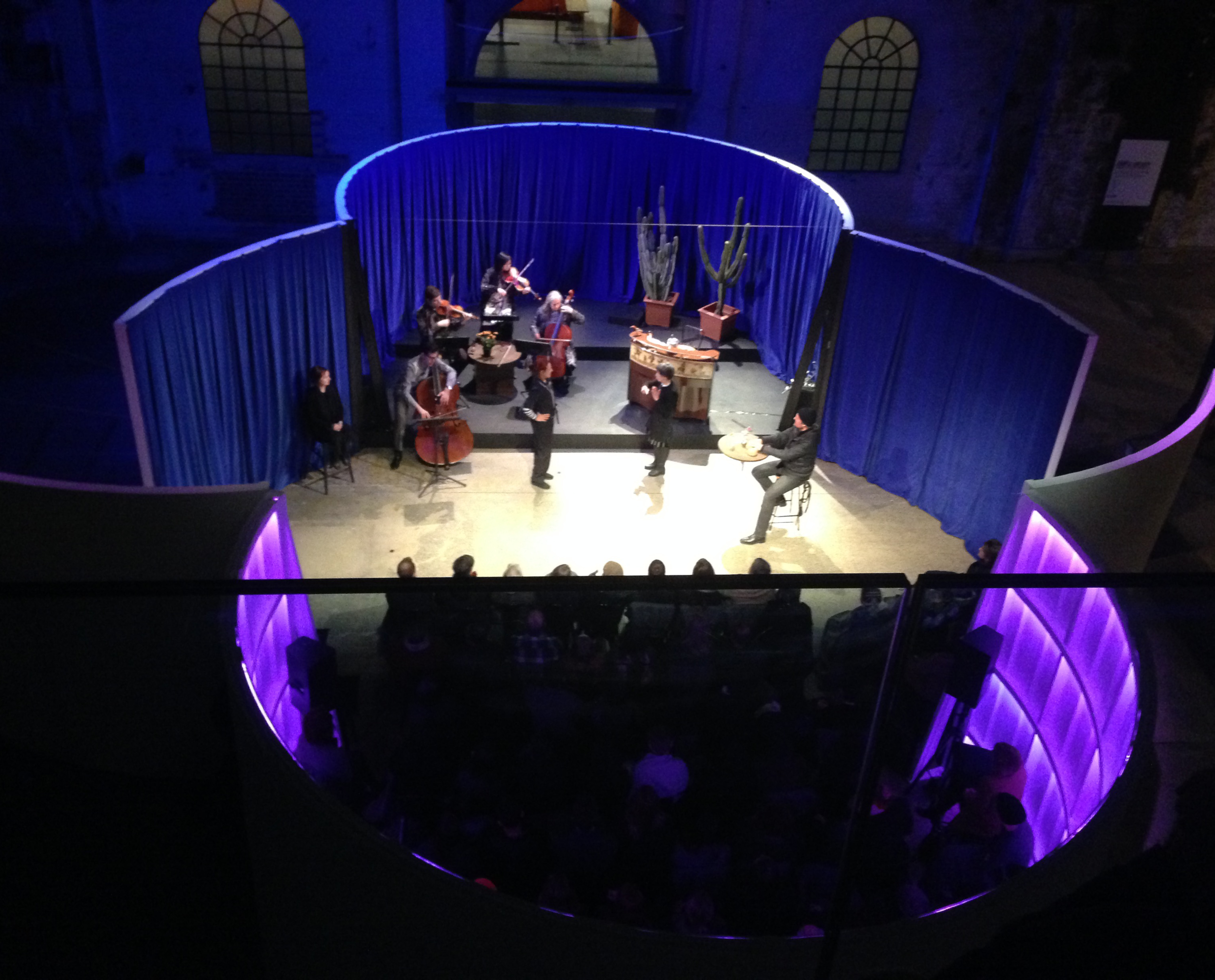 A man walks into a bar… Bookended by two texts by Gertrude Stein, Simple Infinity is a play within a play. Interweaving performance and a live string quartet, three unlikely people strike up a conversation that shifts between the ephemeral and the everyday. At times sad and touching, yet framed within an age-old joke, Simple Infinity is a poetic reminder that we all see the world a little differently.

Listen to an excerpt of the new music composed by Liberty Kerr, and performed by our string quartet during rehearsals, here.

Carriageworks and Urban Theatre Projects support and acknowledge those working with trauma and those members of the community that have experienced trauma.

Please note some content has come from trauma, and may effect those that work with or have experienced trauma. If you have any concerns, please contact the following services: Beyond Blue, Lifeline, Black Dog Institute, Blue Knot Foundation.

Simple Infinity is part of Carriageworks’ National Arts and Disability Strategy New Normal. Simple Infinity is supported by the NSW Government through the NSW Department of Family and Community Services and Arts NSW.

This project has been assisted by the Australian government through the Ministry for the Arts’ Catalyst—Australian Arts and Culture Fund.

Director: Rosie DennisRosie Dennis is the Artistic Director of Urban Theatre Projects. Her work is technically simple, emotionally evocative and has a strong connection with the everyday. Her work has been presented at more than 25 festivals across Central Europe, the United Kingdom, Australia and New Zealand. Recent works Rosie has directed for Urban Theatre Projects include the award-winning BANKSTOWN:LIVE, presented by Sydney Festival in 2015, and One Day For Peace, a film about faith and the everyday presented in 7 outdoor locations across Western Sydney.

Hawkes is a visual artist who lives and works from his studio in Wedderburn near Campbelltown. Primarily a painter, David uses his knowledge of sculpture and building to inform his design work. David has collaborated and builder/designer on two previous UTP works: Life As We Know It and Democratic Garden. David is represented by Watters Gallery, Sydney and has had over 20 solo exhibitions and several group shows. His work is in many private, corporate and public collections, including the National Gallery of Australia and the National Gallery of Victoria.

Kerr is an accomplished electronic artist, guitarist and experimental cellist. Liberty’s stylistically diverse music and soundscapes have provided the sonic environment for a variety of works across performance, film and installation for more than two decades. Liberty has worked with several companies including Belvoir, Performing Lines, Sydney Fashion Week, De Quincey Co. and has had her music licensed for SBS, ABC, BBC and Channel 9.

Molino is a performer/devisor who graduated from performance at University of Wollongong and holds a diploma as a Radiographer. She has toured all over Australia, Europe, Asia and South America, and worked with a range of companies including Stalker, Marrugekku, Kantanka, Urban Theatre Projects and the Opera Project. Katia also devises her own work, which spans across performance and video work, and occasional costume design.

Gollan is a director, writer and one of the presenters for the educational television show for children Playschool since 1991. She recently made a short film called Gimpsey, a short drama about a young woman with Cerebral Palsy struggling with a toxic friendship that screened at St Kilda Film Festival. Sofya is currently the Deaf Arts Officer for Accessible Arts.