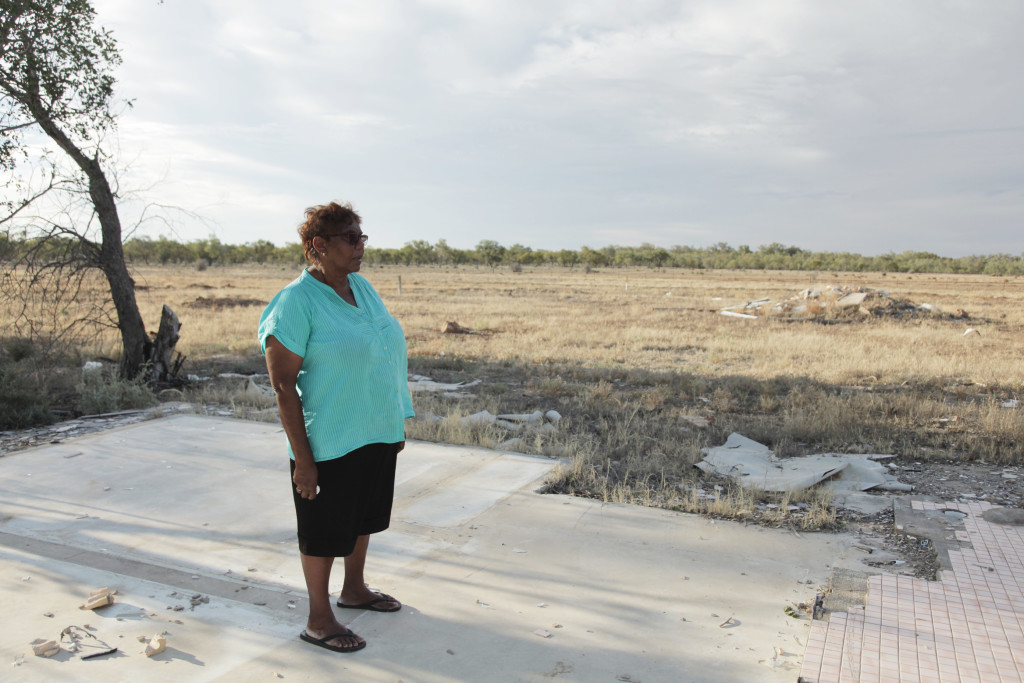 Bre & Back goes to the heart of one of the most significant relationships we have in our lifetime – that with our mother.

Told from the perspective of four First Nations women, Grace and Jenny Shillingsworth and Lily and Noeleen Shearer, we are invited into the rhythm of their everyday as they share memories of home, tales of fishing and offer wisdom and insight.

Ngemba woman Jenny Shillingsworth travels from her home in Minto, south-west Sydney back to her birthplace – Brewarrina – a small and once thriving town in the far reaches of north-west NSW. She goes to visit her mother, Grace, and her extended family. Taken away by authorities at a young age and brought up in a Christian home, Jenny has had to rekindle her relationship with her mother over the years and rediscover her culture.

Until recently, Murawarri woman Lily Shearer lived in Belmore, in Sydney’s west. After 27 years of living off country she moved back to Brewarrina to spend time with her mother, Noeleen. Lily talks of the strong family and cultural values Noeleen instilled in her and her brothers. Invited into the rhythm of the everyday, Noeleen shares stories of her family, fishing and living in Bre.

Inherent in the interweaving stories of Jenny and Grace, Lily and Noeleen is Australia’s Assimilation policies and the impact this has had on families and communities. But the focus of Bre & Back is on the strength of these four inspiring women, and their stories of wisdom and resilience, love and forgiveness.

The Journey Of Bre & Back So Far…

Bre & Back was one of nine new works that premiered as part of BANKSTOWN:LIVE in Sydney Festival 2015. It has since screened at the Art Gallery of NSW (2015), the inaugural Festival of Baiami’s Ngunnhu in Brewarrina (2015), Refugee Week (2015), NSW Parliament House (2015) and it was part of the WOW Film Festival (2016) with further film festivals to come. UTP continues to pursue distribution opportunities that extend the impact of Bre & Back including the education and community sector and broadcast partners. In July 2017, SBS acquired Bre & Back‘s rights for three years starting with its broadcast on NITV and availability on SBS On Demand in August.

Bre & Back is now available to tour, for more information and enquiries contact us by emailing [email protected]

Wonderful, uplifting but painful too. Engaging with these incredible women and their stories, and acknowledging the struggle that every First Nations family has to manage, is essential for people like me who are so distant from rural Australia and unaware of the real history.  You’ve made a beautiful and powerful film, and as a representation of so many forgotten stories, it will surely help to educate the ignorant and over time hopefully to heal some wounds.

A beautiful mediation on love, life and identity… some of the shots are startlingly beautiful, and had a wonderful honesty about them. Thank you.

Jenny Shillingsworth (1951) is a Ngemba woman who, since 1981, has lived in Minto in Sydney’s south west (NSW). She was taken (with her sister) under Australia’s Assimilation Policy when she was five. She went to find her family, in Brewarrina, when she was 18. Jenny has recently taken up painting to learn more about her cultural roots, and in 2011 her work was shortlisted for the Parliament of NSW Aboriginal Art Prize. Jenny’s theatre credits include Life As We Know It that premiered at Campbelltown Arts Centre in 2012.

Lily Shearer(1963) is a Muruwaroi woman with over 30 years experience in Aboriginal cultural development, theatre and performance making, and arts management. Lily grew up in Bre and chose to go to boarding school for high school in Sydney to ‘get the best of both worlds.’ She has worked in leadership roles on a remarkable number of projects and co-founded Moogahlin Performing Arts in 2007. In 2012 Lily was one of six recipients of the British Council’s Accelerate Indigenous Creative Leaders program.

Rosie Dennis is the Artistic Director of Urban Theatre Projects. She is best known for bringing stories to the stage that are full of humanity and have a distinct universality and currency. Her work has been presented at more than 25 festivals across Central Europe, the United Kingdom, Australia and New Zealand. The 2011 Sydney Festival presented Driven To New Pastures and the award winning MINTO:LIVE which Rosie conceived and curated for Campbelltown Arts Centre. Rosie is the 2011 recipient of the Rex Cramphorn Theatre Scholarship that supports new and original voices in Australian theatre and an Australian Council Cultural Leadership grant 2012.

Since graduating from AFTRS in 2007 with a Masters in Cinematography, Bonnie’s feature credits include My Tehran for Sale, Being Venice and most recently Zak Hilditch’s feature These Final Hours, having first teamed up with Zak to shoot his short film Transmission which screened at 2012 Tribeca Film Festival, Flickerfest and St Kilda Film Festival this year where it won Best Short Film. Transmission was also nominated for an ACCTA for Best Short Film. Bonnie also shot Stephen Page’s chapter Sand for Arenamedia’s feature The Turning based on Tim Winton’s novel.

Carolyn Constantine is known for her notable work as a DOP with emerging Australian directors such as Cate Shortland – Pentuphouse (Kodak and Dendy Award winner) and Somersault (2nd Unit DOP and director) and Husein – Beginnings (Dendy Award winner). She has equally made a mark on US projects including the feature Night Owls of Coventry by Sundance Award winning director Laura Paglin. Carolyn’s work on high profile documentaries includes Yajilarra, which screened at the UN, Brian Eno on his last trip to Australia and the highly acclaimed Smoke & Mirrors show at the famous Spiegeltent.

David Tranter is an Alyawarra man from the central desert region of Australia. He learnt his craft at CAAMA television and has since worked on hundreds of projects. He won the Australian Screen Sound Guild award and an AFI Award for Best Sound on a feature film for Samson & Delilah. David’s directing career began in 2004 with the making of documentaries about the history and Dreaming stories from his own country. Karli Jalangu (Boomerang Today) was quickly followed by Living Country, Crook Hat and Camphoo (2005), Willaberta Jack (2007), Karlu Karlu (Devil’s Marbles) 2008 and Crookhat and the Kulanada in 2010.

Andrew Bellletty spent his formative years working in remote Indigenous communities throughout Australia as a founding member of the Indigenous band Yothu Yindi. For the past twenty years he has worked internationally as a cinematic sound designer, which has included a ten year stint in India working on commercial (Bollywood) and art-house films.

Special Thanks to: Beverley Miranda

Bre & Back is supported by the NSW Government through the NSW Department of Family and Community Services and Arts NSW.