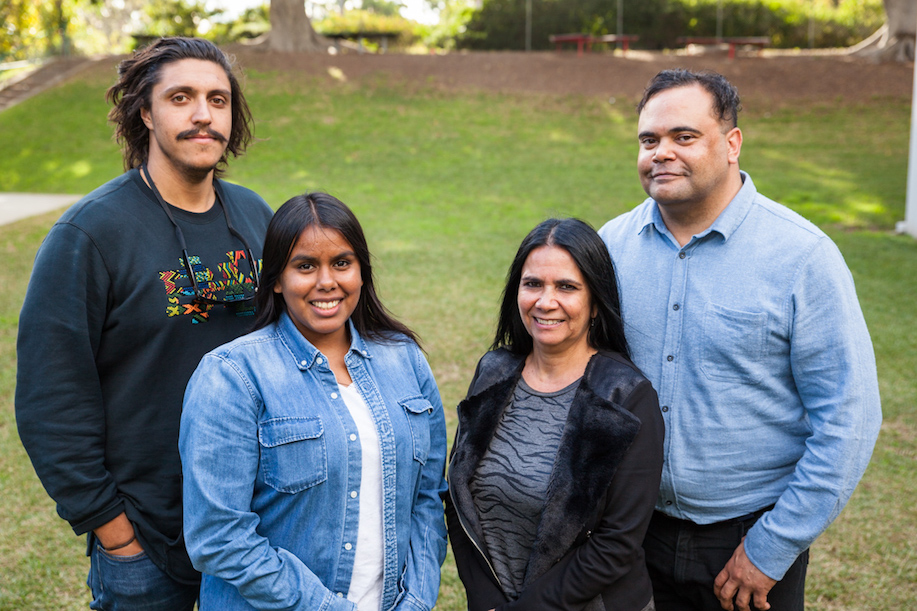 A Fast and Furious Week of Writing for First Nations Artists

Initiated in 2013, B-Side is an Urban Theatre Projects initiative for First Nations artists to seed and develop new writing and paving the way for new work. B-Side is like a fire-starter, giving artists the opportunity to tease out an idea on the page in a professional, supported and culturally safe environment with a direct and immediate outcome.

During B-Side, First Nations artists work in close collaboration with one another and industry professionals to develop a short fictional essay/monologue, which is then recorded, post-produced, published on iTunes and programmed for radio. Our 2017 partner is Koori Radio 93.7FM 2LND, Sydney’s only First Nations radio station.

B-Side builds sector relationships through peer exchange and promotes First Peoples perspectives, knowledge and points of view. B-Side alumni include Katie Beckett whose work Dad & Me (2013) was further developed as Which Way Home by Ilbijerri and premiered in Melbourne’s Northcote Townhalll as part of the Speak Easy Program 2016. Billy McPherson’s Cuz (2014) was recently presented in Canada and is now being further developed by Moogahlin Performing Arts at Carriageworks.

Grainer is from the Northern Territory and was involved in the 2017 Yellamundie National First Peoples Playwriting Festival as part of the Sydney Festival. Phoebe is interested in applied theatre practices and is a recent National Institute of Dramatic Art (NIDA) acting graduate.

Kennedy is a writer and performer involved in writing and performance since the Black Theatre Redfern in the 1980’s. Victoria was recently involved in the 2017 Yellamundie Festival as part of the Sydney Festival and is currently participating in Playwriting Australia’s Muru project in association with Moogahlin Performing Arts.

E. S. Kelly is a Bundjalung and Wiradjuri man of Queensland and NSW. He studied at NAISDA Dance College, and he is an artist who works with multiple art forms including choreography, dance, theatre, music composition, puppetry and teaching. Thomas’ performance credits include: Long Grass and Les Festivities Lubrufie (Carriageworks), Am I and Trolleys (Shaun Parker & Company).

Kinchela aka Sean W. Reid is a Gomeroi Man from NSW and an Interdisciplinary Artist. Colin is currently directing a web-series for Information Cultural Exchange (ICE) with Aboriginal youth in West Sydney. Past residencies include: Performance Space, University of NSW, Urban Theatre Projects and Carriageworks.

Dean is a curator and writer who is trained and practiced as a visual artist in performance art and photo media. Bec is currently Curator at large for Performance Space and was previously Curator at the Australian Centre for Photography (ACP) and Exhibition Manager at Perth Institute of Contemporary Art (PICA).

It’s Just Dad and Me (excerpt) by Katie Beckett (2013)A young Aboriginal girl loses her mother in a traffic accident and is brought up by her helicopter father.

Dave by Travis Cardona (2013)A rhythmic heart beat pulses through one man’s struggle with the modern social ceremony of nightclub life.

The Debut by Gayle Kennedy (2014)A young girl living in an outback town is about to experience her first NAIDOC debutant ball.

Cuz by Billy Mac (2014)The story of two young Aboriginal men and their connection to the local mighty Condamine River spirit.

Untitled by Marley Nipps (2013)A runaway from an orphanage hides out in the bush and finds himself in the middle of hunting season.

Girl From Cootamundra by Robyn Schmitz (2014)A poignant story about a young Aboriginal girl, stolen as a child and later released in 1928 to work asa house girl.