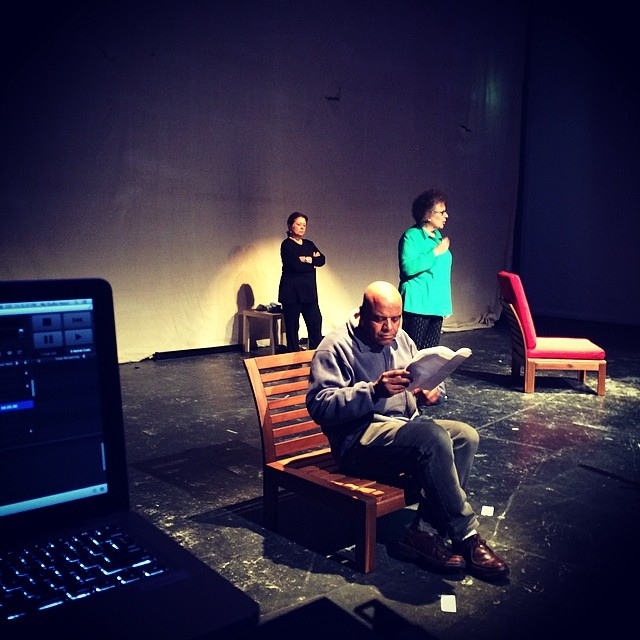 Arab Theatre Studio is Alissar Chidiac, Loubna Haikal and Salah Saqqaf, meeting in Studio 1 in 2014 At The Bankstown Arts Centre

Arab Theatre Studio is Alissar Chidiac, Loubna Haikal and Saleh Saqqaf, in Studio One in 2014 at the Bankstown Arts Centre.

As Arab performers, writers and creative producers, our vision is to slowly rebuild an ongoing base for Arab contemporary theatre work in Australia, by developing an open Arab-centred creative space.

We are starting with many conversations… discussing concepts, stories and inspirations for performance making, doing creative writing exercises, jumping into improvisations, generating sounds, gestures and text. By sharing performance making skills we aim to experiment within the space of Studio One. In the future we will invite guest artists to workshop and challenge us.

Without a specific project plan, nor any deadlines, we hope to collaboratively create new work, possibly curating mini-performance events and eclectic programmes. It would be great to organise small public conversations, facilitating listening groups and critical cultural conversations. This could grow into forums with a focus on Arab contemporary cultural production, ultimately building Australian and international connections and exchanges.

Saqqaf is an actor, journalist, broadcaster, media and community cultural development trainer. Graduate from University of Technology Sydney in 1992, Bachelor of Arts in Communication.

Saleh’s work experience includes Sydney Theatre  Company: Howard Katz. Sidetrack Theatre: Citizen X. Taqa Theatre: The Moon Gate, and Writing With The Hip. Veto Theatre: The Man Who Lost His Shadow, as well as performance roles with many other bilingual community theatre groups, and a range of screen productions.

Saleh has worked as a voice over of air promotional and continuity announcement and behind the scenes segments with Walt Disney Television, the Middle East Channel.

At present Saleh is working as a broadcaster at the Special Broadcasting Service (SBS) Australia,  the Arabic Language  program.

Haikal is interested in language, stories, and  life transforming experiences.

Loubna studied music, Classical dance, and Medicine. She worked in General practice and in women’s health for several years. Loubna wrote her first poem in Arabic, at the age of 11yrs. It was published in AlHawadeth newspaper in Lebanon. In the 80’s, Loubna acted with the Griffon French theatre company at Melbourne University. She wrote, produced, directed and co-choreographed a folkloric Ballet, Near Saida, for the Melbourne Arts Festival.

In 2007, her Play, Exits won the Varuna Flagship fellowship. It subsequently had 2 playreadings at Parnassus Den and was nominated for the Mitch Mathews award.

In 2010, Loubna was invited back to Beirut, her birth place, by Unesco to speak on the Literature of Exile. In 2013 Loubna became a founding member of the Sydney Arabic choir, a community choir based in Redfern. Loubna has extensive experience in motherhood, sisterhood, aunthood and neighbourhood…, all the hoods that require good listening, daily cooking and make great ingredients for story telling.

Chidiac has been working in community and cultural engagement for over 30 years. Since 1991 her special focus has been on Arab Australian cultures – through performance work, cultural heritage and contemporary cultural production.

Alissar worked as an artist / facilitator with Death Defying Theatre (1991-1995) in its strategic move to Western Sydney. She worked at the Powerhouse Museum in Sydney (1998-2004) where she initiated a diversity of projects, innovative exhibitions and Arab community partnerships through the wattan project. She has creatively developed and managed model projects with Auburn Community Development Network, including: the Auburn Poets and Writers Group (2005-2010); the women’s capacity building arts project, Inside Out_Muslim Women Exploring Identities and Creative Expressions (2005-2007) and in 2009-2010, bringing together artists of Arabic and Chinese calligraphies and local Aboriginal artists through Moving Calligraphy_Visual Storytelling. In 2011-2012 she was the Creative Producer of Casula Powerhouse Art Centre’s national initiative No Added Sugar: Engagement and Self-Determination: Australian Muslim Women Artists. Alissar is currently working with Community Partnerships at the Australia Council for the Arts.